Get funded at One Spark, The World‚Äôs Crowdfunding Festival, on April 17th-21st 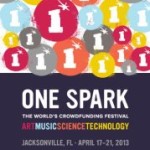 18 simple ways to create buzz for your next big thing

We LOVE this story. Maybe because we‚Äôre jealous but we checked out Anna‚Äôs suits and they are hot + functional! Make sure to check them out at Calavera Swimwear.

An investment banker who worked long hours at a London-based firm, Anna Jerstrom found herself with a glut of unused vacation days when 2009 came to a close. She decided to give surfing camp in Costa Rica a go.

That trip changed everything. Jerstrom, who grew up in Sweden, loved the sport so much she quit her job, moved to Costa Rica and became a surfer.

“It was like Blue Crush, without the handsome leading man,” she says. “I was super-scared, but I fell in love with surfing.” 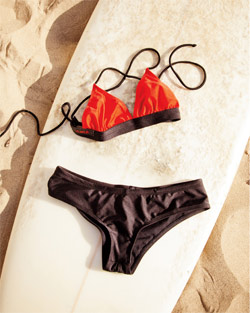 What JerstIn 2010, she put those sketches to work and founded Newport Beach, Calif.-based¬ÝCalavera, a line of bikinis designed to stay on, no matter how rough the surf. Jerstrom‚Äôs designs incorporate eyelets and other closures typically used on men‚Äôs boardshorts, as well as hidden spots to secure car keys and other essentials. The bikini bottoms have Velcro and less elasticity in the band, so they don‚Äôt slip when a surfer gets pounded by a wave. The tops have tie systems that prevent pressure on the neck.rom did not love was surfing attire for women-namely, ill-fitting bikinis. “You‚Äôd be out in the waves, walk out of the water and literally you‚Äôve lost your bottoms,” she says. Though Jerstrom made many of her own clothes, she had no professional experience as a designer. But she did have sketchbooks full of ideas.

Jerstrom raised $150,000 in seed money from 10 investors, largely through contacts from her days in the finance industry. With the initial funding, she started making the suits and sponsored five surfers to test the designs. They recorded 55 videos that demonstrate the suits‚Äô performance in the surf-helpful, since the bikinis look deceptively simple (and skimpy).

Read all the goodness at Entrepreneur.com